Whats happening with our teams? 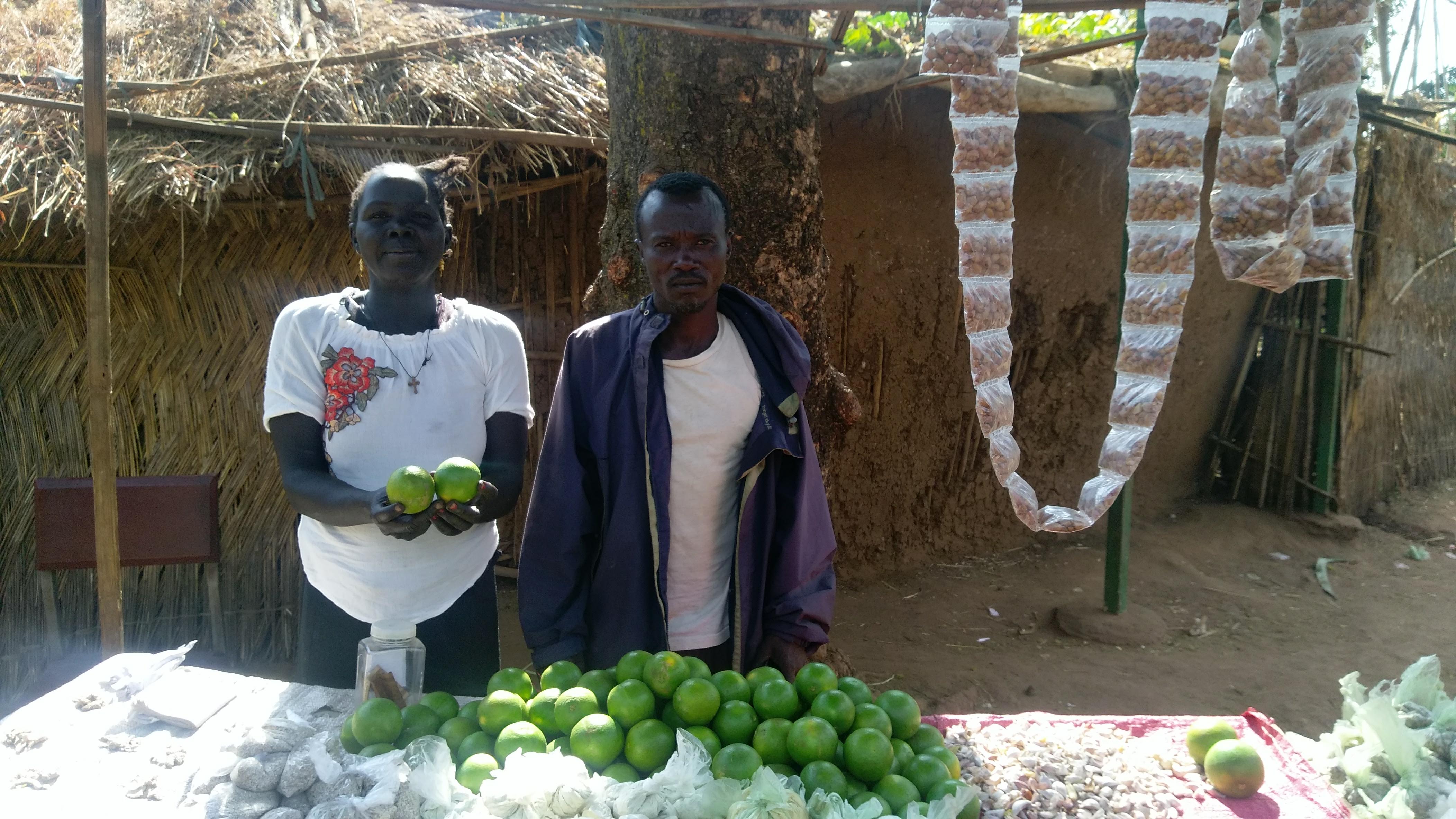 Bahria and her husband standing in front of their local store seen above: Sherkole Refugee Camp.

At the core of our efforts to serve, we believe that refugees in Ethiopia and South Sudan can be self sustainable in their communities through education and projects aimed at meeting real needs. Bahria above, a community member in Sherkole, married outside of her ethnic group (the Uduk). She and her husband now live in an Uduk zone of Sherkole Refugee Camp where their self funded store is functioning very well.  They are an example of success for what the local Uduk Hope teams aim to do: provide for the real geographical and resource needs through local efforts. Without local stores, people usually walk 5 to 10 miles to buy produce, clothing, and livestock. The average family in Sherkole and Tsore Camp visits a store 2 to 4 times a week because no single family owns a refrigerator to allow goods to last. Generally, food that is purchased needs to be consumed that very day or night.

The original Uduk Hope team members are still active. The requests from the Sherkole team for this year include continued financial support for buying chairs and office supplies. For their local business model, they aim to start a movie theater near their office and they want to set up a charging station for electronic devices. In 2019, Uduk Hopeʼs primary focus will be supporting our local teams’ business ideas, which will help us attain our vision of having self sufficient and empowered communities that fund our initiatives.

Our Uduk Hope Team in Tsore is composed of real problem-solvers that understand not only the needs of the community but also a wide array of resources that are available in that community. These resources are not always free, but can be acquired at a fair price. In 2017 and 2018, food distribution to all ethnic groups living in Tsore arrived late on a continual basis. Those living in Tsore had to borrow food from others (such as neighbors who had something to share), promising to pay them back when the distribution finally came. Each time distribution day came, people found themselves paying back their debts and falling into the same hunger deficit that they were in before.  In 2018, Uduk Hopeʼs Tsore team decided to do something about this issue with a financial contribution from our main office in Rochester. They went to the nearest major city, Asosa, and purchased multiple 50-kilo bags of sorghum and created a storehouse in Tsore.

Families in need of food and schools that couldn’t provide lunches to their students were able to either purchase or borrow from this UHI storehouse. Since this initiative satisfied such a big need and required little investment on our end, this local business has been active and thriving since 2017. Today, the team is looking to expand their business with the hope of becoming completely self-dependent. They hope to break from the history of being 100% dependent on UNHCR’s provisions that are subject to funding gaps and redistribution policies given unforeseen fluctuations in the world refugee population, internal conflict, or loss of donors. This happens very often with big organizations serving multiple regions worldwide. Currently the Tsore team is turning their efforts to start a second business. Similar to the Sherkole team, they are trying to get a movie theater up and running. Camp research done by Uduk Hope teams in each of the three camps has shown that owning a movie “theater”, where films are screened for an audience at a small price, is a strong investment for making a substantial profit. The funds from the theater can then be used for scholarships, food services, church support and community projects such as health education, activities for children and so on.

Traveling to Tongo Refugee Camp from Sherkole and Tsore  has been very difficult in the last three years. With recent violence in the region where Tongo is located, the Ethiopian government has blocked off roads and stalled internal movement towards and away from that region. This has had huge affects on the provision of food to most refugee camps as the roads needed to deliver food from the capital (Addis Ababa) run through part of the affected region. The Tongo team is in need of assistance for their local business ideas, so they can also become self reliant during this difficult time. They have seen some of the ideas working in the other two camps, but the Tongo team is also taking their time to tailor their plans to their community’s specific needs.

The Tongo team is lead by Pastor Santino Samuel Kona, a well-known figure and great public speaker. He has been pivotal in communicating with our teams in Ethiopia and updating our team in the USA with things happening on the ground. His team is hoping that that region will be deemed secure so that the refugees living in the hills of Tongo can have free movement again. Of the three refugee camps that we serve in Ethiopia, Tongo is the furthest removed from a major city and it takes about an hour’s walk to get to the nearest store for food needs. The UNHCR distribution center is a 30 minute walk down the rolling hills. Our local team in Tongo desires to remain active and be the difference makers in their community. They have asked us to continue partnering with them as they develop their business ideas as the other camps have.

Doro Refugee Camp and Next Steps

We have not visited Doro Camp since we sent a team in 2016. Nevertheless, it was the work in Doro that really informed what we do today in the Ethiopian camps. The last communication we received from Doro informed us that the local UHI team members have changed. Two of the original team members are still among the new team and the selection criteria remains the same, following the guidance we provided in 2016. The team can consist of anyone who wants to serve the community, who has a reputation for being reliable and honest, and is chosen by the community. The ideal makeup of the team should include 4 women and 4 men to make a total of 8.  It has been difficult, given the political situation in South Sudan, to financially support our Doro team. Our USA team is currently looking for new ways for financial distribution to the Doro team. At this time, the School Feeding program in Doro is no longer being funded by Uduk Hope Inc. for lack of funding. Also at this time, Doro’s local store (the original Uduk Hope small business) is no longer being funded for lack of proper ways to send money for the store’s maintenance and the programs it supports. The Ethiopian camps in contrast use established banks, Western Union, and cash to purchase what they need. For now it seems that the best way to support our Doro team is to send one of the Ethiopian teams to them with the funding for their programs and continued training.

As emphasized above, Uduk Hope Inc.’s approach to serving in the refugee camps has changed, with a new focus on supporting local businesses to fund our initiatives. Here are the things that are still the same: We still aim to support refugees in the areas of education, faith, and community development. We still have active teams in the three camps we serve in Ethiopia and one in South Sudan. In the same way, we still communicate and raise funds for those teams to offer support under our three pillars. What we have changed is our vision for funding. Instead of raising funds for each individual community program, we are only aiming at supporting the success of each camp’s local stores. Each local team will be responsible for identifying projects and initiatives that they will financially support, using the profits from their local stores. In the meantime, our USA team will continue to raise funds for expanding the size and effectiveness of those stores and saving money for UHI teams to visit Ethiopia and South Sudan.

For the past few years, Uduk Hope Inc. has seen a significant decrease in its usual operating budget. We aim to get back to a place where support is consistent and our donors are being updated monthly. For now until further notice, we will  be accepting checks made out to Uduk Hope Inc. and mailed to our new address of 1330 Emerson Street Apartment B., Rochester, NY 14606. We are accepting online donations as well through our website. If you have any questions, concerns, or would like to see more pictures related to the work we’re doing, please let us know as we are happy to make resources available to you. Please email: Udukhope@gmail.com and we will get back to you as soon as we can. Thank you for your continued support!

All proceeds go to Uduk Hope Inc. and our programs. When you donate, you give more than money.
You give HOPE.

You have Successfully Subscribed!